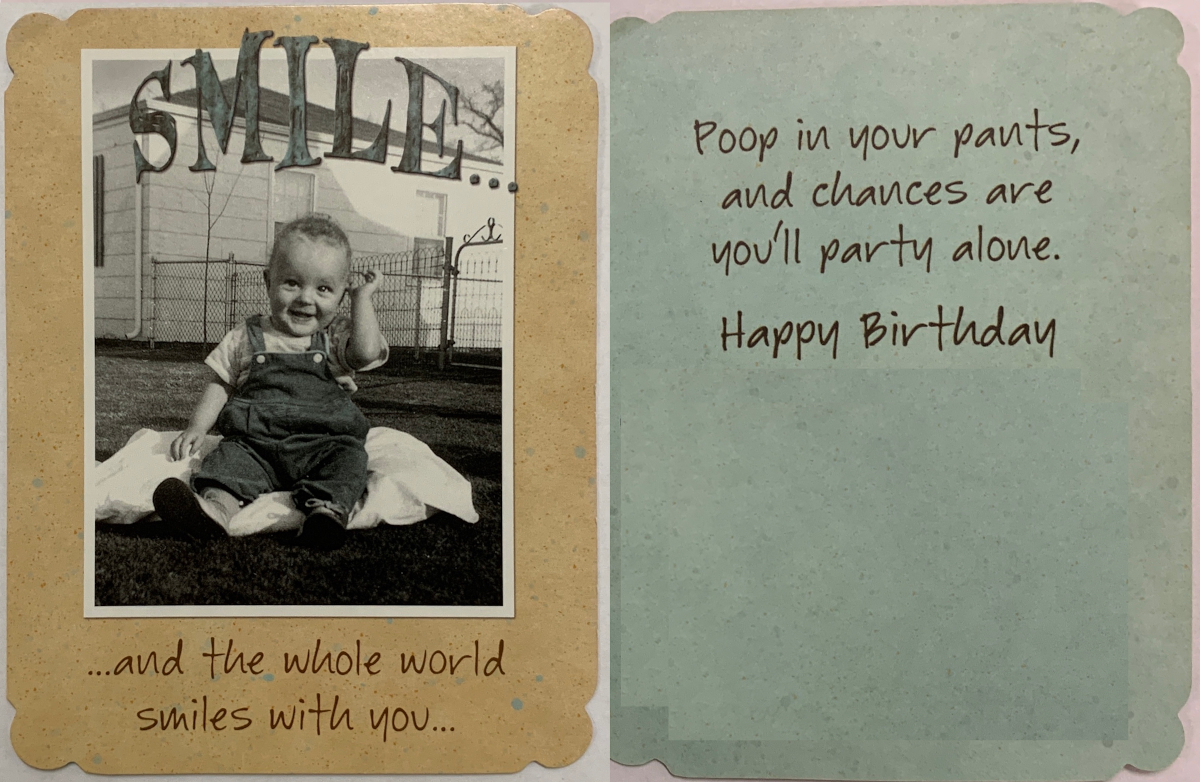 February 1st was my 47th birftday day. Hooray! I survived another year. And… ?

(there’s going out to eat several times on other people’s dime.)

Besides going out to eat, I look forward to the cards. I pride myself on the cynical/snarky/inappropriate cards I send out, which garner me a return in kind. Most are relatively tame compared to mine, but sometimes I am surprised. This year I received a birftday day card from my Aunt and Uncle, who are in their mid seventies and nowhere near as “dark” as I am. It was cute card (the one in the feature image). It read: “Smile …and the whole world smiles with you…” (on the cover). Inside: “Poop in your pants, and chances are you’ll party alone. Happy birthday.” See what I mean, cute right? Perfect for a boomer septuagenarian to give to their gen x, mid-life nephew.

Little did they know just how perfect this card is for me, not because I normally poop my pants, but… eh… shit happens. More so because while I’ve grown into a man with better control of his bowels, this card reminded me of a time when I wasn’t much older than the kid on the cover…

It was the last day, the last day of my career at St. Paul’s Episcopal pre-school/kindergarten. I had packed up all my work, supplies, and lunch box. There was a solemnity to the occasion bordering on panic that I didn’t quite understand. It was the end of something, the beginning of another. I understood that much from packing up everything, particularly the things that normally stayed at school. But I wasn’t sure what, exactly, it meant?

What I didn’t know was all of the students in my class were going to a different school for first grade. Had I known that, I might have been in full meltdown. In the confusion all I knew was my stomach was grumbling. And that rumble was winding its way around into an imminent “boom-boom.” Whatever vague existential crisis I was in was going to have to wait. This was a DEFCON 1 poo poo attack and there was no time to make it to the bathroom. The class was standing in line next to our desks waiting to leave. Each classroom was excused in turn, and within each class, each row of students filed out in orderly fashion. As the oldest students, at the end of the hall, we were the last in line. My row half way in the classroom.

I clenched as best I could. The familiar sting of holding back hit eased my nerves a bit. I was a stubborn pooper in the best of times, so I was used to being anal-retentive. There was even some satisfaction in yo-yoing a bit, which in this moment, I did. Unfortunately, this was not a yo-yo compliant turd, and as soon as I relaxed a bit it took the opportunity to make a run for it. And in horror I found my colon lean into it, pushing it along its way.

The turd dropped into my underwear like a red hot anvil causing me to partially squat to give it as much room as I could to keep it from rubbing against my skin. I started squirming trying to move it along. It did, slipping out of my underwear and down my left pant leg. It got stuck part way down so I kicked my leg out like a cat with tape on its foot. It broke free easily and slipped down into my boot. Phew!

“What’s wrong with you?” the little girl behind me said.

I shot up stiff and straight as if called to attention by a drill Sergeant. I’d completely forgotten where I was, and that someone was behind me. The turd in my boot smashed into a patty when I stomped down on it.

In my mid thirties, I had a girlfriend, Misty. We loved to talk shit to one another. One day, in a particularly good round of trash-talking, she turned to me in all seriousness and said, “You. Are. A. Poo. Poo. Pants.”

She looked at me with a shit-eating, I-just-schooled-your-ass grin, lips pursed, ready for me to concede defeat.

Her eyes widened in horror, mouth dropped open. She couldn’t talk; she didn’t move. She stood there watching me weep like a child, something I’d never done in the four years we had been dating.

As shocked as she was, I was even more so. Where in the fuck had this come from? We’d said far more hurtful things to one another, and it had never elicited such a response. We knew we were just goofing. And yet somehow, this childish insult had completely broke me.

It all came back to me. I remembered that last day of kindergarten: my horror at being caught, my failed attempts to explain my way out of it, the little girl’s look of disgust only growing more toothy until she walked past me, leaving me standing there, frozen, in my shit filled boot.

The teacher had to call me several times before I snapped out of it. She tried to hurry me along, but every step was a limp, my pride stabbing me with every squish. Because we lived two blocks from the school, I walked home (this was the ‘70s and I had a terrible mother). This day those two blocks were longer than a trip around the world. When I got home, I went straight to my room, straight to my bathroom, took off my boot and emptied it into the toilet. I took my sock off and put it inside the other. I rolled up my pant leg so I could wash my foot in the bath. When I was clean I took my boots and hid them in the back of my closet. I took my socks out to the trashcan outside and put them as deep as I could.

So, yeah. Poop in your pants and you’ll party alone. AND if you internalize it, it’ll fester as a crushing PTSD that will surface at an innocent moment and shut you down again, many decades later. How’s that for a Hallmark card?